If you have symptoms such as swelling, tenderness and pain of one or both legs (or less commonly arms), your doctor may send you to the vascular lab for an ultrasound to test for DVT (Deep Vein Thrombosis). DVT is the partial or total blockage of one or several veins in a limb by clotting of the blood, which can lead to symptoms described above.

Why does DVT occur?

DVT can occur if the limb or vein affected has been involved in trauma or injury, if the limb has been immobile for a prolonged period of time (for example during bed rest or long haul flight), or if the mechanisms for normal blood clotting are for some reason altered (eg. by hormones or during illness).

On visiting the vascular lab for a DVT assessment, we will use an ultrasound scanner with some cool gel to visualise the veins in the affected limb or limbs. The flow in your veins will be examined, which usually requires some gentle squeezing of the calf, and the veins will be compressed to make sure they are not obstructed by clot, which involves some gentle pressure with the ultrasound probe.

The results of your scan will be sent back to your doctor, or if you have been referred from A&E we will give you your report to take back to the doctors there immediately after.

What if my test shows I have a blood clot?

The doctors will review you and decide if you will benefit from anticoagulant medication to thin the blood and reduce clotting.

Diagram of a DVT 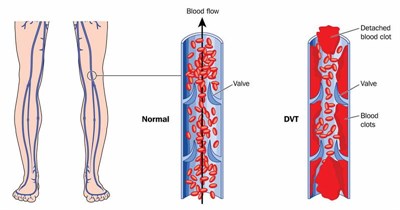