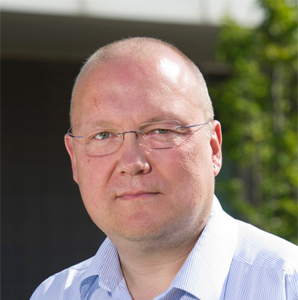 Peter-Marc pursued and initial career in electronics and contributed to the research program that resulted in the first digital mobile phones. He then returned to university as a mature student and trained in medicine, at Southampton University, graduating in 1992. After completing basic paediatric & anaesthetic training he completed specialist training in children’s intensive care at Great Ormond Street Hospital, London and at the Royal Children’s Hospital, Melbourne, Australia. His first consultant position was as one of the founding members of the Children’s Acute Transport Service (CATS), London; the first dedicated children’s critical care transport service in the UK.

He joined the Royal Manchester Children’s Critical Care team in 2002 and became Clinical Director of Critical Care in 2005. He played a major role in the design of the critical care unit in the new hospital building that opened in 2009 and became Associate Clinical Head of RMCH in 2012.
Peter-Marc is currently President of Paediatric Intensive Care Society, Chair of the paediatric Making it Safer Together Collaborative (MiST), Chair and Editor of Advanced Life Support Group; Neonatal, Adult and Paediatric Safe Transport and Retrieval Course (NAPSTaR) and Co-Chair of the Recommended Summary Plan for Emergency Care and treatment (ReSPECT) working group. He has particular interests in Medical Informatics, human factors, patient safety, Resuscitation, Medical Education and Medical Ethics (MA Keele 2004)