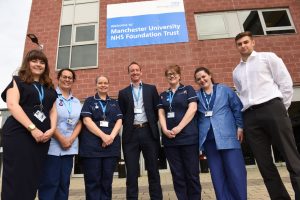 For the first time anywhere in the UK, all smokers admitted to hospital in Greater Manchester will be offered intensive support and medication to help them kick their tobacco addiction.

The CURE programme has been launched today at Wythenshawe Hospital (part of Manchester University NHS Foundation Trust), on the first day of Stoptober, a nationwide stop-smoking challenge which encourages smokers to get support to quit. From now on all patients admitted to Wythenshawe Hospital will be prescribed medication to tackle their addiction to tobacco and offered intensive support to help them stay smoke-free during their stay at hospital and once they go home.

CURE is modelled on a comprehensive approach to treating tobacco addiction in hospitals that has been highly effective in Canada. It is part of Greater Manchester Health and Social Care Partnership’s Making Smoking History programme.

Dr Matt Evison, Consultant in Respiratory Medicine at Wythenshawe Hospital, said, “It’s hugely exciting that Manchester is the first place in the UK to offer this support to smokers. A stay in hospital is often a time where people focus on their health, whether or not they’re being admitted for a condition related to their smoking. There is no greater step a smoker can take to improve their health than stopping smoking. But nicotine is highly addictive and smoking is a hard habit to kick without support and medication.

“Many smokers don’t fully appreciate the strength of tobacco addiction. This is a physical disease where the brain becomes dependent on nicotine. Without nicotine, a smoker will suffer intense withdrawal symptoms and that’s why it’s so hard to quit smoking without help.

“The good news is that we have some very effective treatments for this disease, medications that help break this dependence on nicotine. I’m delighted that from today all smokers admitted to Wythenshawe Hospital will be provided with these treatments and supported by specialist smoking cessation nurses to help them quit.”

At present, most patients with an addiction to tobacco are not offered help, support or treatment when they are admitted to hospital in the UK.

“Currently, only six per cent of hospital patients who smoke are referred to specialist smoking cessation services. With the CURE Programme we want to make that 100 per cent across Greater Manchester, so that those who want to quit get the best possible support to do so.”

Greater Manchester Health and Social Care Partnership’s Director of Population Health, Sarah Price, explained, “We have ambitious targets to reduce smoking rates in Greater Manchester by a third by the end of 2020. This will only be achieved through innovative but tested approaches like the CURE Programme.

“The CURE Programme is just one way in which we’re taking charge of health and social care across Greater Manchester, using devolution to transform the health and wellbeing of our 2.8 million residents.”

The launch of CURE has been welcomed by the UK’s leading expert on tobacco addiction and smoking cessation.

Professor John Britton, Director of the UK Centre for Tobacco and Alcohol Studies and lead editor of the 2018 Royal College of Physicians report ‘Hiding in plain sight: treating tobacco dependency in the NHS’, said: “I welcome the launch of the CURE programme, which is an example of true leadership in delivering the smoking treatment services in secondary care that have been recommended for some time by the Royal College of Physicians, NICE and other organisations.

“CURE has the potential to save thousands of lives and generate significant reductions in demand for NHS services. I commend the Greater Manchester Health and Social Care Partnership team for providing this example of good practice.”