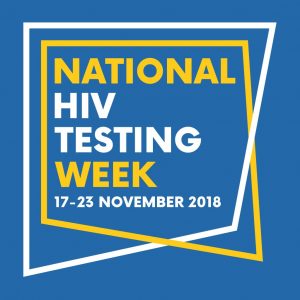 Did you know that around 745 people in Greater Manchester are unaware that they are infected with HIV?

Manchester is classed as an extremely high prevalence area for HIV infection, with more than 5 people per 1,000 infected.

National HIV Testing Week (NHTW) starts on Saturday 17th November.  This is a flagship campaign that aims to promote regular testing among the most affected population groups and to reduce the rates of undiagnosed people and those diagnosed late.

In the UK, the combination prevention approach to HIV means we are witnessing a substantial decline in HIV diagnoses for the first time.

If you are diagnosed early enough with HIV, you can live a near-normal lifespan.

You can have a healthy sex life and give birth to HIV-uninfected babies.

If you are stable on treatment this protects your sexual partners from getting infected.  Undetectable = Untransmittable.

Andy Burnham, Mayor of Greater Manchester, has signed Manchester up to the Fast Track Cities Initiative to reach 90% diagnosed: 90% on treatment : 90% with an undetectable viral load and eliminate stigma and discrimination associated with the virus.

Manchester Health and Social Care Partnership have committed funds to end all new transmissions of HIV within a generation.

On Tuesday 15th November, staff from the Northern Sexual Health Service will have an information stand in the MRI atrium opposite the Multi-Faith Centre from 8am – 3pm to support and raise awareness around National HIV Testing Week.   Staff, visitors and patients are welcome to visit the stand to find out more and support National HIV Testing Week and help reduce the stigma of HIV.

For information on how to get tested, see:  http://www.thenorthernsexualhealth.co.uk.