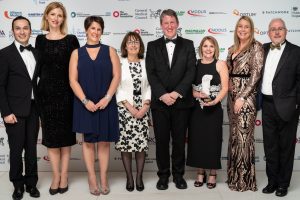 The team behind Manchester’s Lung Health Check Programme has been named Cancer Care Team of the year at the BMJ Awards, the UK’s leading medical awards.

The initiative is managed by Wythenshawe Hospital, part of Manchester University NHS Foundation Trust, and delivered in partnership with Manchester Health and Care Commissioning (MHCC), Cobalt, and Siemens Healthineers.

Lung Health Check support units and CT vehicles are currently in place outside the Etihad Stadium, after which they will relocate to other key community-based locations across North and East Manchester over the next two years. The first-of-their-kind mobile units utilise ultra low-dose CT scanners, meaning tests can be carried out quickly, and taken to easily accessible areas in the community.

The 2019 BMJ Awards were held in Park Plaza, Westminster, London. Now in their 11th year, the awards recognise the professionalism, commitment, creativity, and hard work of healthcare teams across the UK. Each year more than 350 teams enter the awards and compete to get their work recognised in front of their peers, their organisation and the wider healthcare community.

Dr Richard Booton, Clinical Director of Lung Cancer and Thoracic Surgery at Wythenshawe Hospital, said: “The Lung Health Checks team are thrilled to have won this award, especially given the level of national competition in this category.

“It’s fantastic to have the programme’s work recognised by the medical industry. Thanks to new technology and an innovative approach to screening, we’re now able to identify lung cancers more quickly, more easily, and earlier in their development than ever before.”