Greater Manchester residents can now be fitted with a pacemaker seven days a week thanks to co-operative working from hospitals across Manchester University NHS Foundation Trust (MFT).

This is the first time such a service has been made possible in the UK outside of London, and has come about thanks to collaboration from the cardiology teams at Wythenshawe Hospital and Manchester Royal Infirmary.

A pacemaker is a small device about the size of a matchbox that sends electrical pulses to the heart to keep it beating regularly. Having a pacemaker can significantly improve quality of life for those with an irregular heart rate, and can potentially be lifesaving for some people.

In the UK pacemaker implantation is one of the most common types of heart surgery carried out, with many thousands of pacemakers fitted each year.

The operation is a relatively straightforward process that’s usually carried out under local anaesthetic. The pacemaker is most often placed under the skin near the collarbone, attached to a wire that’s guided to the heart.

The procedure usually takes about an hour, and most people are able to leave hospital within a day after the surgery.

Now heart specialists at MFT have devised a staff structure across Wythenshawe Hospital and Manchester Royal Infirmary that means a cardiologist and other essential staff will be available to carry out the procedure week-round.

Before, pacemakers were sometimes implanted on weekends or bank holidays, but this was dependent on having the correct people available on any given day. The rest of the time, patients would need to wait. Now, cardiologists and other essential staff have combined their working arrangements so that expertise in pacemakers is available all year round.

Specialists at the Trust believe it’s a way of working that could be rolled out across the country. 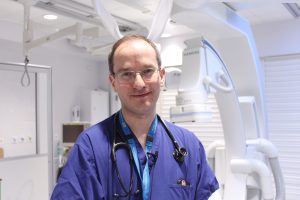 Dr Niall Campbell, Consultant Cardiologist at Wythenshawe Hospital and Clinical Lead for Devices said:  “This new provision has come about thanks to a pioneering way of working between staff at Manchester Royal Infirmary and Wythenshawe Hospital. Now patients in our hospitals can have access to a pacemaker any day of the week, meaning we can treat them more safely and get them home quicker.

“This was made possible thanks to the merger that created MFT back in 2017, enabling hospitals under the Trust to work more closely together and combine services like these to the benefit of our patients.”

Launched in October, 2017, MFT brought together nine hospitals under one NHS Trust in order to provide a better, safer, and more consistent care for patients in the City of Manchester, Trafford, and the wider communities. MFT is now one of the biggest NHS Trusts in the UK.

Barbara Taylor, a 68 year old resident of Gatley, was the first to benefit from this service. She was admitted to Wythenshawe Hospital as an emergency on Friday 26 April, had a pacemaker fitted that Saturday, and was discharged on Sunday.

Barbara said: “When I was told that I needed to be fitted with a pacemaker it came as a huge shock. However I was delighted with the care I received and very impressed with how quickly I was looked after. Now I feel fine and I’m recovering well at home. It’s great to know that there is good care like this available when you need it.”

Barbara’s operation was carried out at Wythenshawe Hospital by Dr Fozia Ahmed, a Consultant Cardiologist based at Manchester Royal Infirmary.

Dr Ahmed said: “Barbara received a pacemaker within 24 hours of her admission on the Friday. This enabled her to go home over the weekend and avoid a prolonged hospital stay.”