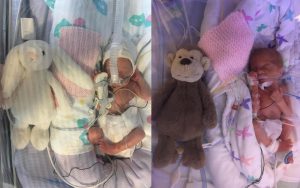 PARENTS of premature twins born with rare birth defects, weighing 720g (1lb 9oz) and 820g (1lb 13oz) – the equivalent weight of a loaf of bread, have paid tribute to staff at Saint Mary’s Hospital (SMH) and Royal Manchester Children’s Hospital (RMCH) for their specialist care and treatment this year.

Twins April and Evie were both born with the rare birth defect; Oesophageal Atresia (OA) with Tracheo-Oesophageal Fistula (TOF), which affects approximately 1 in 4,000 newborns.

As the defect is not genetic, the chance of them both being affected is incredibly rare and to date, they are the tiniest set of twins seen with this condition at RMCH and SMH, part of Manchester University NHS Foundation Trust (MFT).

The girls had a challenging start to life as first time mum; Lindsay went into labour without realising at 26-weeks – almost four months early in February this year. After an emergency caesarean at Burnley General Hospital, the twins were promptly transferred to Saint Mary’s Hospital Newborn Intensive Care Unit (NICU) with parents Lindsay and Stephen, where they were provided with one-to-one surgical and medical care – all under one roof. 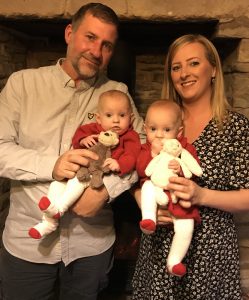 The defect meant that the twins would not be able to swallow as the oesophagus (the tube through which food passes from the mouth to the stomach) is not connected. The condition can result in life-threatening problems such as choking and pneumonia if not treated quickly.

Within hours of being born, April and Evie underwent life-saving surgery at RMCH, led by Consultant Surgeons David Wilkinson and Nick Lansdale who operated on one baby each as an emergency case.

Surgeries were incredibly challenging due to their extremely low birthweight, but both were successfully fitted with a gastrostomy which meant they could be fed via a tube directly into their stomach. They would both require further major surgery when they had grown sufficiently.

Following surgeries in the Children’s Hospital theatres, the twins were transferred back to NICU which offers first-class specialist surgical and medical care, looking after babies from across the North West region. The co-location of both Saint Mary’s Hospital and the Royal Manchester Children’s Hospital meant that they could be cared for across both connecting sites with ease.

Parents Lindsay and Stephen, who live in Burnley said: “The work that is carried out between the teams across both hospitals in amazing, and the nurses and surgical teams are incredible. I cannot thank them enough for their ongoing care and compassion throughout one of the most difficult times for us. They never gave up hope and the girls are now our little miracles.”

RMCH operates on approximately 15 babies per year with the rare congenital condition OA with TOF, but what makes this case unique is that both twins were born with it, and were so premature. This was only the third set of twins that surgeons have operated on with this defect at RMCH – but the girls were the first extremely premature twins they have seen with this condition.

Neonatologists on NICU work closely with the surgeons and anaesthetists and hold a weekly meeting to discuss all surgical babies, ensuring that the best care is provided to all new babies with a surgical condition within the integrated hospital complex at MFT.

After intense nursing and medical care from the team on NICU which involved one to one, round the clock care for both April and Evie, they were taken for their second round of major surgery. Surgeons David Wilkinson and Nick Lansdale worked together again, supported by a team of anaesthetists to perform the corrective surgery which would enable April and Evie to both to feed normally.

It was a challenge for both surgeons and the anaesthetic team to perform the surgery and although April showed signs of improvement immediately, Evie, after more than six hours in theatre, became critically unwell and almost didn’t make it.

Nick Lansdale, Consultant Neonatal Surgeon at Royal Manchester Children’s Hospital said: “Oesophageal Atresia affecting both twins is extremely rare. April and Evie’s surgery was made challenging by their tiny size at birth, with each twin’s oesophagus being approximately the diameter of a piece of spaghetti. Their outcomes are a tribute to the wider Manchester Neonatal Surgery Multi-Disciplinary Teams and their family’s support.”

Following surgery, Evie’s health was very fragile and she spent ten weeks on a ventilator whilst being cared for on NICU. She was resuscitated by the team multiple times and required very intensive nursing care, with her own nurse caring for her 24 hours a day. This was essential to monitor her breathing support and to provide all of the medications she needed when she was most unwell.

Ruth Gottstein, Neonatologist on NICU at Saint Mary’s Hospital said: “It was a real challenge to look after these incredibly premature twins with such a rare surgical diagnosis. We had to use all our expertise to ensure their health progressed so that we could get them home with their family. Evie was a bit more of a challenge than her sister as we had to put her on a life support machine, but they were both little fighters and amazing little girls.”

Lindsay added: “The whole team on NICU were just amazing and never gave up hope for Evie, which is what we needed. We nearly lost her on a few occasions and she was resuscitated more times than we like to remember but she pulled through and we are so proud of them both.”

For five months the parents lived onsite at Ronald McDonald House, making it much easier to visit the girls at any time, putting their minds at ease. April was discharged to Ronald McDonald House on 21st June and lived there with mum, Lindsay and dad Stephen for four weeks until Evie was well enough to go home too. On 20th July, Evie was also discharged and the family are now adapting to their new routines.

Lindsay and Stephen added: “To all of the nurses, doctors, surgeons and anaesthetists that have helped us through this year, I cannot thank you enough for your support that you have provided us.

“Even when we visit now for check-ups, we feel so welcome and the staff within the hospital make us feel like family. I don’t know how we would have got through this challenging time without you all. April and Evie are doing great and we are so pleased to have them both in good health and home for their first Christmas after a challenging year for us all.”

April and Evie will attend the hospital for check-ups at the specialist Oeosphageal Atresia clinic at the Royal Manchester Children’s Hospital, every couple of months until they are adults. The family returned to the hospital today to take part in some of the Christmas festivities and to meet up with some of the specialists and surgeons who have helped them through this year.