Earlier this week, Manchester welcomed the festive season with a little help from three MFT colleagues who switched on the Manchester Christmas Lights. 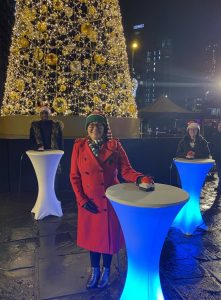 Representing NHS workers in the region, Emma Davies, Clinical Scientist in Virology, Kev Esin, Ward Clerk at Manchester Royal Infirmary and Gilly Lee, Neighbourhood Lead for Manchester Local Care Organisation had the honour of pushing the button for this year’s lights and officially welcoming Christmas to the city.

The annual Christmas Light Switch-on is usually one of the biggest events of the year but due to the pandemic, this year it was a small, socially-distanced event outside Manchester Cathedral.

A huge Christmas tree was lit up outside and hundreds of twinkling lights on Deansgate. Emma, Gilly and Kev were joined by Councillor Pat Karney, Manchester Cathedral Choir and Salford Cathedral Choir who performed a number of Christmas carols. A small, socially-distanced crowd also turned out to watch the switch-on.

You can playback the livestream here and see more pictures and coverage on the Manchester Evening News website.