This accreditation has been given under the government’s Defence Employer Recognition Scheme.  The scheme acknowledges employer organisations that pledge, demonstrate or advocate support to the defence and the armed forces community, and align their values with the Armed Forces Covenant.  MFT signed this covenant in 2019.

The Trust supports employees who are reservists, with 10 days paid leave for their required forces training, operates a network for staff with links to the armed forces and recognises, in its recruitment guidelines, the transferable skills armed forces personnel can bring to the organisation.

MFT employs 22 staff members, including doctors and nurses, who are also currently serving as reservists in local regiments.

Kathy Cowell said; “We have made it a priority to ensure all those who serve, or who have served in the armed forces, and their families, are treated with fairness and respect.

“The Defence Employer Recognition Scheme (ERS) Silver Award, and accreditation by the Veterans Covenant Healthcare Alliance, both reinforce our commitment to achieving this and to inspiring others to do the same.

“These achievements are a credit to our employees and I am very pleased that we have staff representatives, with strong links to the armed forces, present at the ceremony.  Over the next year, we will work towards our gold accreditation under the ERS.”

Royal Navy veteran, David Brayshaw, Director of Laboratory Medicine at MFT, said; “I’m a keen advocate for tapping into the numerous NHS roles which would absolutely benefit from employing armed forces’ veterans and this isn’t restricted to just medical staffing roles. Skills and experiences acquired in the military are, in my view, fully transferable to the NHS.”

This year MFT was named a ‘Veteran Aware Trust’ by the Veterans Covenant Healthcare Alliance, a group of hospital trusts aiming to improve the healthcare veterans receive from the NHS.

As part of the ceremony, Kathy Cowell presented a plaque to Colonel Nick Medway TD VR, Deputy Commander North, to recognise the ‘dedication and efforts’ of MFT reservists in supporting the Trust and wider NHS during the pandemic. This is part of an ongoing initiative by MFT to thank all their staff for outstanding work during Covid-19. 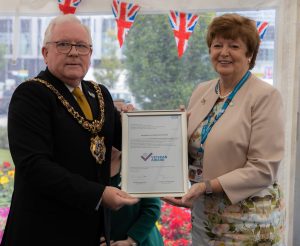 Colonel Medway said; “Reservists from MFT, and other hospital groups locally, play an absolutely crucial role in providing medical care for our soldiers on overseas deployment. We are grateful to NHS employers, like MFT, who proactively support their involvement.  These reservists have also done a fantastic job during the pandemic and I am delighted to accept this plaque on their behalf.”

Andy Burnham, Mayor of Greater Manchester, who attended the event, said; “The awards presented demonstrate here in Greater Manchester and at Manchester University NHS Foundation Trust in particular, the value of the Armed Forces, Veterans and Reservists.

“There has been a huge amount of support provided by Reservists to the NHS during the past 18 months and I am proud to see the work that goes on when organisations collaborate successfully with one another.”

The armed forces personnel in attendance at the special ceremony at MFT were from a variety of regiments from across the North West region, including logistics, nursing and army medical corps.

The event included a display of military vehicles and stalls from armed forces charities and organisations providing information about their services. 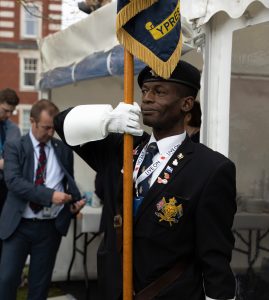