A grandmother-of-five who has helped 1,700 poorly children make the trip to see Santa in Lapland over 20 years has praised staff at Manchester Royal Eye Hospital for saving her sight.

The specialist eye treatment at the Oxford Road Campus meant the children could continue with their Yuletide trips abroad between 2012 and 2018.

Back in the late 1990s, Maria was one of the founders of the North West branch of the charity ‘When You Wish Upon a Star’, which dedicates itself to supporting poorly children by giving them trips of a lifetime.

Thanks to the treatment, Maria was able to continue her charity work each year by taking around 100 poorly children and their families from across the North West to Lapland to see Father Christmas – the breaks she helped arrange meant that 1,700 children had the opportunity to see Santa between 1998 and 2018.

Now Maria has marked the 10th anniversary of her treatment starting by writing a special letter of thanks to Ms Romi Chhabra, the Consultant Ophthalmologist who began her treatment, praising her for the support through the last decade.

Maria wrote: “Ms Chhabra consoled me through the tears as the realisation of the seriousness of my condition threatened to overwhelm me, and she understood the impact AMD has not only had on me, but my family and friends.

“She has encouraged me to carry on with the treatments and I’ve since had 10 years of injections, now in both eyes. The support I’ve had means that I could keep planning the trips for the children. It’s not just changed my life – it’s also helped so many children.”

Keeping her sight also means that Maria has kept her hobby of making handmade greetings cards, which she enjoys sending to friends and family.

Maria added: “I have had to change the card designs over the years to make the designs simpler, as my vision has become more limited, but I’ve kept it as a hobby for a decade which would not have been possible if I hadn’t received the on-going treatment at Manchester Royal Eye Hospital team.

“I moved from Stockport to Northwich is 2018 but stayed with the hospital, because of the excellent care and support which I received. They’ve made such a difference to my life and I can’t thank them enough.” 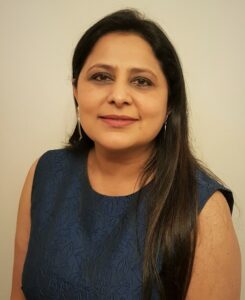 Ms Romi Chhabra, the Consultant Ophthalmologist, at Manchester Royal Eye Hospital added: “We were so pleased to have received this letter – what a magnificent woman Maria is in so many ways. We made her wish come true by keeping her eyesight going over the last 10 years, while Maria made the trip of a lifetime come true for so many children.

“Maria has moved homes a few times but has always chosen to remain as one of our patients at the Manchester Royal Eye Hospital. Having looked after Maria for so many years, it is my belief that she comes here because she feels that she’s receiving the best possible treatment, support and care for her chronic eye condition – this is from a very empathic, understanding, caring and expert medical retina team.”