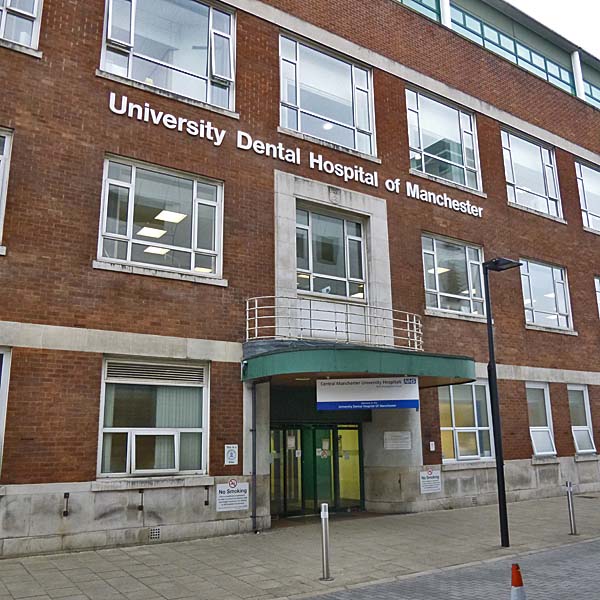 The University Dental Hospital of Manchester is one of the key specialist dental hospitals in the UK. Around 90,000 patients come to us for treatment every year, and we look after both adults and children.

All our staff want to ensure you have a good experience during your treatment at the hospital .  If you have any concerns or worries, do please talk to the team treating you or your child. They are very happy to explain everything involved in your treatment and follow-up care, and help with any worries you may have.

History Of The Dental Hospital

The Dental Hospital was founded in 1883 to serve the dental side of the medical school by allowing staff and students to attend to patients unable to pay for private dental treatment. All these hospitals were intended for the poor, for it was not until the end of the 19th century that richer folk sought hospital treatment. It was opened in Grosvenor Street, All Saints Manchester. Since then the Dental Hospital and School have occupied several other buildings.

The passing of the 1878 Dental Act had introduced a new Register for Licensed Dentists (an effort to exclude quacks from the trade), and once the Royal College of Surgeons gave the new hospital formal recognition as a teaching site in 1884, students began to seek instruction. As for patients, the hospital’s governing body decided to open the Hospital’s treatment rooms three evenings a week for the working poor who would otherwise lose wages if attending in day-time. This scheme (which was never adopted in any ordinary hospital) proved a roaring success, and by 1887 the Hospital was treating more than 10,000 patients per year, the great majority during the evenings.

Several large donations during the early 1900s secured a site, and a new Victoria Dental Hospital was constructed next to the University Museum on Oxford Road (of which the dental building is now a part).  A major donation to Manchester hospitals in the 1920s and 1930s came from a new trade — from Sir Samuel Turner, the Rochdale businessman and head of Turner and Newall asbestos manufacturers, who paid for a new dental hospital.

It was to have been officially opened in June 1940, but the Second World War intervened:

The opening ceremony was cancelled but the hospital was at work from May. Seven months later it was bombed during an air-raid, and passed much of the rest of the war without windows, but it took on numerous war duties allocated by the Ministry of Health, including routine dentistry for all service personnel, evacuees, refugees, and war-related factory workers.

The long-awaited redevelopment of the University Dental Hospital of Manchester was finally completed in the early months of 1972. The clinical workload of the Hospital had continued to increase sharply, especially in primary care and oral surgery, and the new facilities were also intended to enhance relationships between the Dental Hospital, the University and other local teaching hospitals. New facilities, a new curriculum and new visiting arrangements with city dental clinics were all intended to raise the profile of Manchester as a centre of excellence in dental teaching, and the 1970s did indeed see a steady rise in student enrolment. The re-equipped Dental Hospital also provided better training for dental technicians (building on the introduction of technician qualifications in the mid-1960s), and of dental surgery assistants and other ancillary staff.  Specialists in relatively new fields such as plastic surgery and speech therapy were appointed to the hospital, and ancillary departments and clinics, such as oral pathology and paediatric dentistry, were squeezed in alongside the more established dental work.

For many decades the state of the teeth of Manchester had been a cause of serious concern. The 1990s saw a vigorous fund-raising effort directed at local and national groups for the creation of a new Dental Education Centre. The School’s reputation for education was already impressive: By the mid-1990s some 25% of all postgraduate dental students in England and Wales had passed through its doors. When the new Educational Centre opened in 1998, £2.25 million had been collected, and the fund continued to expand. All branches of the profession were served by the Centre including dental therapists, hygienists, technicians and nurses. Also in 1998, the Dental Hospital was nominated as the regional centre for the management of specialised Cleft Lip and Palate services. This service brought together a range of specialists, including surgeons, orthodontists and speech and language therapists, and became a template for 15 new regional centres across the UK. That same year saw the establishment in Manchester of the Cochrane Centre for Oral Health, one of a range of international centres covering many areas of medicine, which collected and analysed research results as a basis for ‘evidence-based practice.’

The Dental Hospital also co-operated with the Infirmary for some surgical cases, and so did the Manchester Foot Hospital, on Anson Street (near Victoria Park), which had been founded in 1920 to train chiropodists and give free treatment to the needy. Like the Dental Hospital it did not have beds, but ran daytime and evening out-patient clinics. Foot problems, though important to many, were even less glamorous than those of teeth.