What is congenital diaphragmatic hernia?

Congenital diaphragmatic hernia (CDH) is a serious condition that develops during pregnancy whilst babies are growing.

Organs from the tummy pass through a hole in the sheet of muscle that separates the tummy from the chest, called the diaphragm. The lungs of babies with CDH are underdeveloped and this causes problems with breathing.

CDH affects each baby differently but most will need help to breathe when they are born.

All babies with CDH will need surgery.

Around 7 in 10 babies born with CDH will survive.

Severe CDH can be life-threatening and can also cause miscarriage or still birth. Read more on Bereavement Services here.

Around half of babies who have CDH are diagnosed on routine antenatal scans.  Other babies with CDH are diagnosed soon after being born, usually because they are struggling to breathe and an X-ray might show the problem. 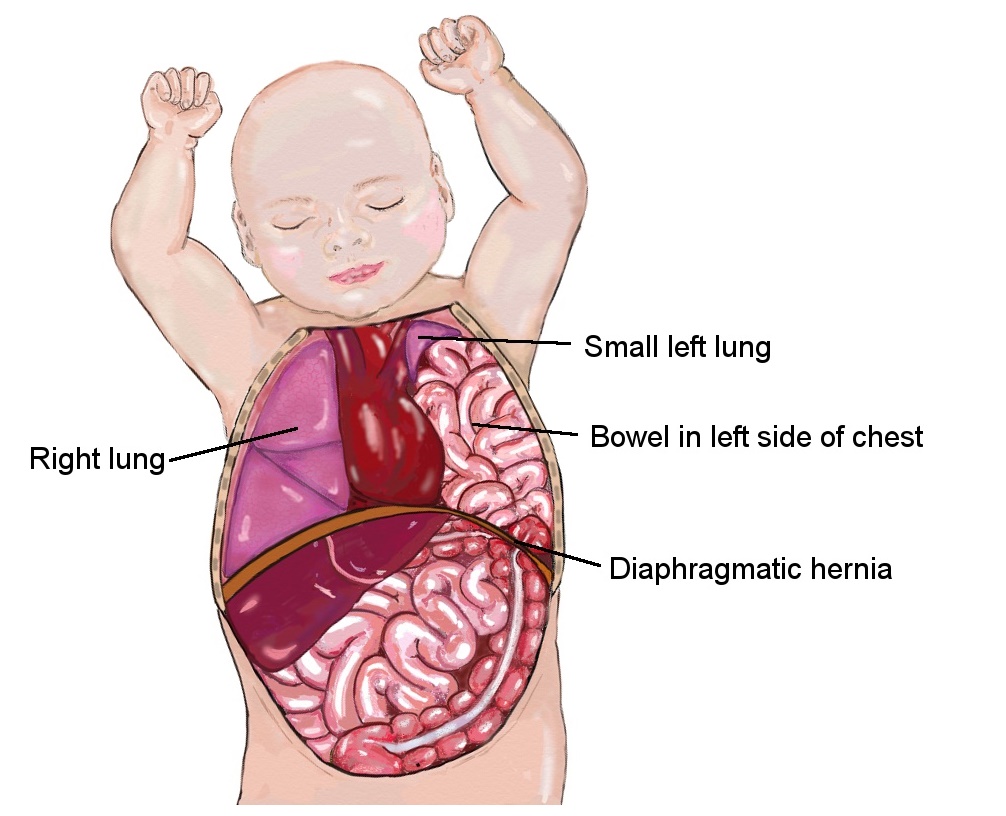 If CDH is diagnosed during pregnancy, the mother’s antenatal care will be transferred to the FANS clinic.

The mother will have extra tests to check:

Babies with CDH usually have underdeveloped lungs and this is often the most problematic issue for them.

Your baby is likely to need help to breathe from a ventilator when they are first born.

If CDH has been diagnosed on antenatal scans, you will be offered a planned delivery (induction of labour or caesarean section) at St Mary’s Hospital which is part of the Manchester Centre for Neonatal Surgery. You will be given a date for this in advance.

The neonatal team will be in the delivery room and your baby will be passed straight to them after the birth.

The neonatal team will insert 2 tubes:

The team will make every effort for you to be able to see your baby after birth, but it is not likely you will be able to hold them. This is because it is important they are stabilised as quickly as possible.

Babies are then transferred to the Neonatal Intensive Care Unit (NICU).

Most babies with CDH need help to breathe from a ventilator when they are first born.

Ventilators push gases including extra oxygen through a tube and into the lungs. Some babies will need an extra gas called nitric oxide and higher lung pressure from the ventilators.

Helping babies breathe in this way gives them the best chance of surviving and being able to breathe on their own later.

Oscillation is a type of ventilation where gases are pushed in and out of the baby’s lungs very quickly.

It can be a more gentle form of ventilation when very high pressures would have otherwise been required and reduces the risk of damage to the baby’s lungs.

Babies on oscillation can look like they are being wobbled because of how quickly the air goes in and out.

ECMO stands for extra-corporeal membrane oxygenation. ECMO machines are occasionally used for babies with the most serious heart and lung conditions.

ECMO takes over the job of the heart and lungs to maintain a blood supply to the brain and other organs.  This is only carried in a small number of places in the UK and babies will be transferred to another hospital for this.

Surgery can only take place once the baby is more stable and their heart and lungs are strong enough.

The operation will move the organs from the chest into the tummy, and the hernia (hole) in the diaphragm will be fixed.

The timing of this operation varies, but generally babies who require less support for their breathing may have surgery at 48-72 hours old. Others, who need a lot of support, often only become well enough to have surgery after a number of days.

In Manchester, specialist operating theatres are situated directly under NICU and babies are transferred in their incubators. They have a general anaesthetic for the surgery.

A cut is made in the tummy, then the bowel is moved from the chest and placed into the tummy.  The hole in the diaphragm will be stitched together.  A patch or mesh is used to repair larger holes.

Babies will have a scar on their tummy that will fade with time.

Sometimes, keyhole surgery (thoracoscopy) will be used if the baby is well enough and the hole in the diaphragm is felt to be small. In this situation, there will be a number of very small cuts made in the chest wall to allow instruments and a camera to be inserted. 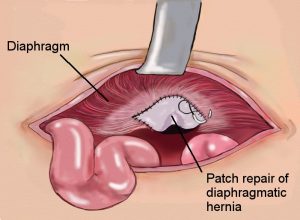 Most babies will be on a ventilator for a number of days after the operation and this time period varies considerably depending on how well the lungs are working.  Usually babies can begin to feed after a few days.

Each baby is different.

The smaller the hernia, the lower chance of complications.

This is fairly rare (less than 1 in 10) but if a patch was used in the first repair the chance of getting a recurrence increases.

If the hernia returns another operation will be needed.

This is where the contents of the stomach (including milk feeds and acid) travel up from the stomach. It is common in all babies but may be more problematic in those with CDH. It can mean the baby brings their milk feeds back up.

Usually this can be successfully treated with medicines. Occasionally an operation called a fundoplication may be required to treat problematic reflux.

Rarely, longer-term breathing support might be needed, including oxygen to use at home.

This is more common in children who used an ECMO machine. All babies will get a hearing check.