If you have been referred for IVF treatment at Saint Mary’s, we ask both partners to watch this video which describes the process, success rates and risks of fertility treatment. We want to ensure that all our patients fully understand what is involved in having fertility treatment. For this reason, we ask all patients undergoing IVF treatment to watch and understand this prior to signing their consent forms for IVF. You will be asked to confirm that you have both watched and understood the video at your treatment planning consultation. Please make a note of any questions that you may have after watching the video. The doctor or nurse at your consultation will be able to answer these questions.

IVF stands for ‘In vitro fertilisation’. This is a type of fertility treatment in which eggs are fertilised with sperm in the laboratory to create embryos. These embryos are then transferred to the womb with the aim of achieving a pregnancy and birth.

This treatment may be recommended for couples with infertility due to a number of reasons. In some cases, other treatments will have been tried first, while in other cases there is no other treatment except IVF.

There are two methods of fertilisation of eggs in the laboratory.  In ‘standard IVF’ the eggs and sperm are mixed together and allowed to fertilise naturally.  This is advised where there is no significant concern about sperm numbers or quality. However, in couples where there is a sperm problem, an alternative method of fertilisation is used, called ‘ICSI’. This stands for Intra-Cytoplasmic Sperm Injection. In this technique, individual sperm are selected and injected into individual mature eggs by the scientist.

Couples are notified of the number of fertilised eggs the morning after egg collection. Usually all fertilised eggs (also called embryos) are cultured in the incubator for possible embryo transfer on day 2, day 3 or day 5.

What does the treatment involve?

The team will decide which protocol best suits your individual circumstances. The protocol for each cycle is tailor-made to the individual based on various parameters, including hormone test results, previous cycle response and associated medical history. This will be discussed with you at your clinic appointment.

You will be given a ‘teach’ appointment in which the nurses will show you how to inject yourself at home with the appropriate medications.

Whichever protocol you are on, there are several stages that are common to both:

Stimulation phase of the cycle with gonadotropin injections

You will be required to attend for scans and blood tests to monitor how the follicles are developing.

Monitoring starts on Day 10 of the injections, but may be advised sooner in some cases.

All scans during the treatment cycle are done vaginally and in the morning along with blood tests – between 8.00 am and 10.00 am.

4. Sperm on the day of egg collection

If the sperm parameters are normal then the egg will be inseminated using IVF, whereby the embryologist will prepare the eggs and sperm and mix them together in a container (Petridish) and allow them to fertilise naturally.

If there are any concerns about the sperm, the ICSI method will be used.  This involves taking up a single sperm in a fine glass needle and then injecting it directly into an egg.

During IVF, the embryos are cultured for up to six days and they are graded when necessary.

Grading is necessary in order to evaluate your embryos to decide which ones(s) should be selected and replaced into your uterus and which ones, if any, to store.

There are a number of ways in which embryos can be graded.  At Saint Mary’s we assess embryos by carefully evaluating and scoring some aspects based on their morphological appearance. For example, you can have 2 to 4 cells after 48 hours and 7-10 cells after 72 hours. The cells in an embryo are referred to as the ‘blastomeres’. It is generally considered best if all these blastomeres are even and similar in size or close to.

When portions of the embryo’s cell are broken and are separate from the nucleated cells, these portions are referred to as fragmentation.  Ideally, there should be very little or no fragmentation present.  However, the occurrence of fragmentation is quite common and several beautiful babies have resulted from fragmented embryos.

The blastocysts are graded based on the expansion state (early, expanding, expanded, and hatching) as well as the quality of the other cell type in the blastocyst. The blastocyst consists of the inner cell mass – which eventually forms the fetal tissues and the trophectoderm – which forms the placenta.

We carefully assess the morphology of all the embryos and select the best embryo(s) to replace for our patients considering every individual patient’s case. 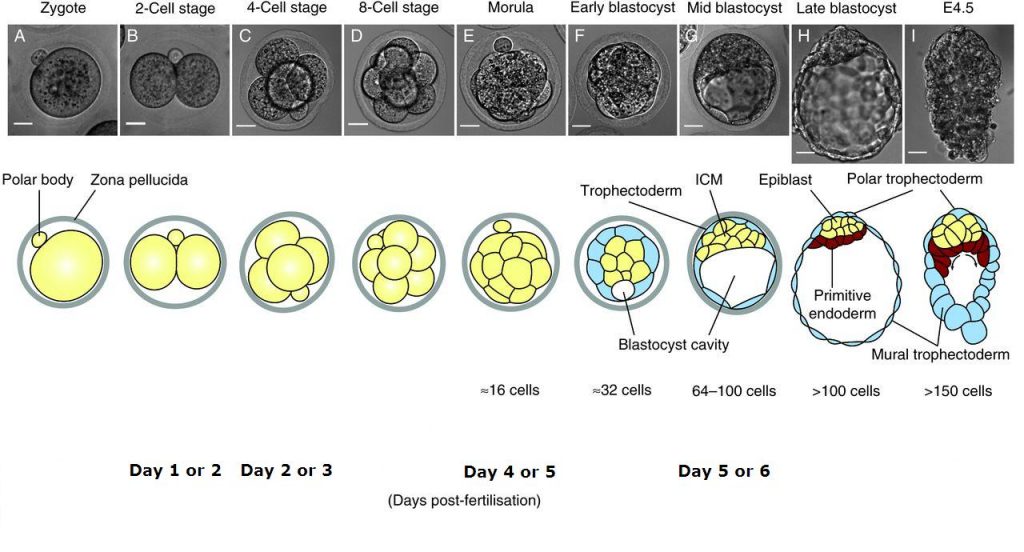 The table below shows an example of the outcome from an IVF cycle.  These may vary significantly, and there are not always embryos available to freeze. 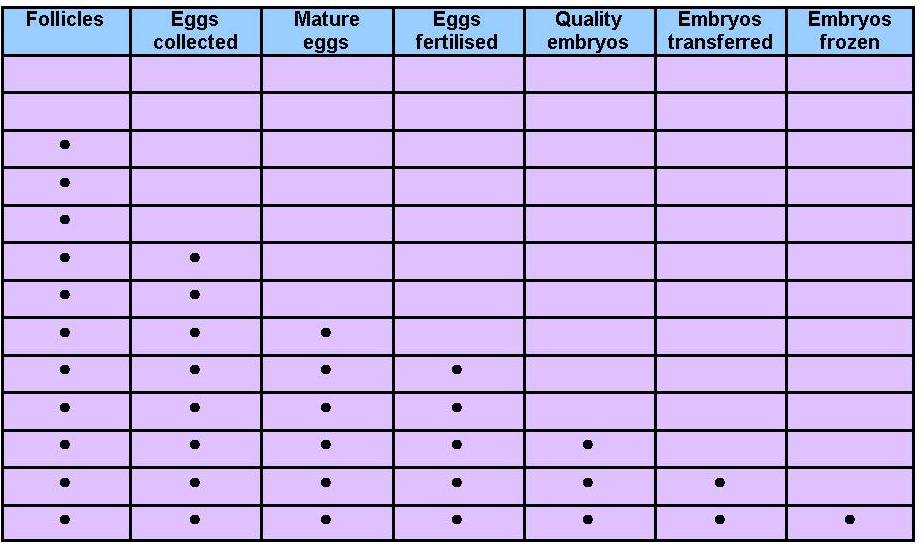 This is a technique involving time lapse imaging technology.  At Saint Mary’s, we use this equipment to record images of your embryos every 15 minutes.  Embryonic cells are normally programmed to divide at set time intervals and the timing of these divisions is known to be of a high clinical value to optimise IVF outcomes. Time lapse videos of your embryos enable our embryologists to enhance embryo selection for transfer by studying these timelines of cell division. This novel and unique application has shown to have a vast improvement in pregnancy rates, as patterns of embryo development can be monitored to select the most viable embryo(s) from a cohort.  Recent reports emerging about the use of this technology are promising and can also be used to reduce the number of embryos to transfer in order to minimise the risks of multiple pregnancy.

Our aim is to select the best one or two embryos for transfer to maximise your chance of pregnancy, but minimise the risk of twin pregnancy.

It is imperative that you inform the unit of the outcome of the treatment cycle – as it is compulsory for the unit to notify the HFEA of all outcomes.